Note: The “f.” in the name stands for “form”, or “forma”. In plant nomenclature, it is secondary to the variety or cultivar. The primary form of this plant is Euphorbia lactea ‘Cristata’, which is an all-green form. This particular form, the variegata, is the same variety (or cultivar in this case), only it has a different leaf appearance.

Note: This plant is a cultivar, and not a variety. ‘Cristata’ is the cultivar name. In short, cultivars are man-made hybrids. Varieties are true forms found in nature.

Care Requirements: Euphorbias are like most succulents in that they require infrequent watering. It will need well-draining soil, and it prefers to dry out between waterings. Never let the roots sit in wet soil. It may need weekly watering in the hot summer months. It can be grown inside with bright indirect light, or outside in partial sun.

Propagation: Most successfully done by grafting, in which you would join a scion (the top portion of a grafted plant) to the rootstock of a stable plant. In this case, you would take one of the crests, and graft it onto Euphorbia canariensis or Euphorbia resinifera.¹

1. a detached living portion of a plant (such as a bud or shoot) joined to a stock in grafting and usually supplying solely aerial parts to a graft

Toxicity: As with all Euphorbias, when a plant gets damaged, it exudes a thick white milky sap known as latex. This latex is poisonous and particularly dangerous for the eyes, skin and mucous membranes. Therefore, it can be poisonous to pets if ingested. Check out my Pet Safety Guide for more information.

Xylem Rising’s Observations: Though it is not recommended to expose this plant to several hours of full sun every day, it will do fine in 2-3 hours of direct sunlight. I put mine outside over the summer, and it went from white with light green tips and a hue of pink, to mostly pink! From several months of sun exposure, the whole plant was pink. After 3 months of being back inside, the pink has remained. It’s so pretty! 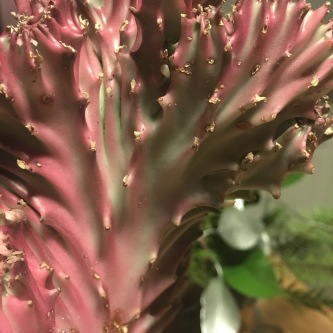 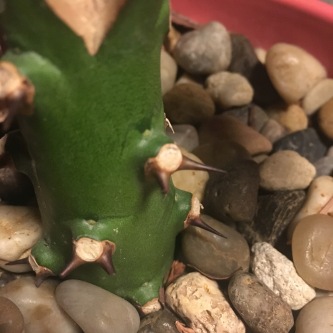 If what you read was helpful, and you never want to miss when I post more species plant care tips, securely sign-up for my e-mail list here.